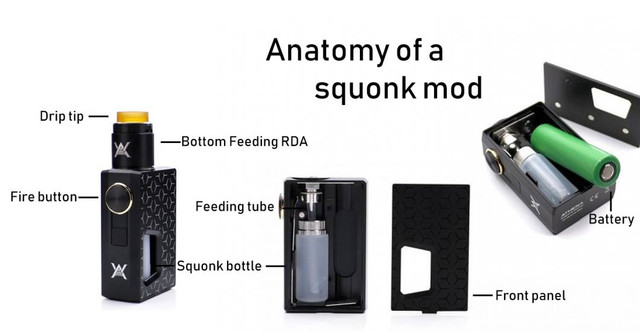 Before we continue all potential squonkers need to know about this already it’s a type of vaping where you install and build your own made coils. If you want deeper vaping but don’t want to deal with that there are already some other methods.

Gypsy Vapes have several kits sub ohm mod ones which give you a lot of vapor and flavor. You don’t really need that article to enjoy vaping as it is. But if you really want to try then there is some learning ahead about how to make your own coils and squonking guide;)

To get with all this you really need to get the correct equipment here. You may need the following:

Number 5) here is totally needed. IT will have ceramic tweezers, coil jigs, and cutters. Tweezers here are also a must cause when you will build a coil you will need to heat, adjust and test spacing between that coils. Ceramic ones are resistant to heat, it’s just obvious.

Squonking, you really need the flood deck of the atomizer here. Burning wick will be avoided that way easily. It also involves sub ohm mods and atomizers like we already stated a bit earlier as well as some e-juice.

A vape mod is the power source for something like an atomizer. But squonk mod is something like a classic box mod. Calling it a box is really mattered here cause it’s indeed a box. A box which contains a squonk bottle and a battery. Most such bottles have capacity like 6ml to 10ml so something like 8ml on average – it’s a most common one really.

Vape mods have a processor and a battery. It could be built-in or changeable, I mean batteries here. Unlikely most vape mods are regulated. By that, we mean that there is a chip or processor which controlling the current is drawn from the battery. That way vape mods provide more modern tech advantage and safety which squonk mods do not simply.

18650 single battery commonly used in most squonk mods. Why not two? Cause squonk body should be big to include a bottle with battery in it. A regulated mod with a 18650 battery will consume something like 75 watts. Very low in resistance coil builds will take much more power from the battery. Though manufacturers learned how to have only one battery making that squonk mods like mech mods – it’s still very dangerous. What you will use mech mods or not it’s safe to operate being an expert in resistance, batteries, and current. It’s probably the main con of squonking.

Pros and Cons of Squonking

Operating such mods could be dangerous for health in many ways unless the user is an expert here.

Need to build own coils.

Gypsy Vapes insists anyone who is interested in squonking buy a regulated squonk mod. There are devices and we have them sometimes which can produce a lot of vapor from done-before coils and regulated mods. Vaping advanced a lot really. And you can let us to help you really. Doing it yourself is really for enthusiasts.

For drippers, it’s the automation of the process.

So basically, the biggest pro that it’s automated dripping and that’s it. It removes the need of having to remove the drip tip or maybe housing in order to move vape liquid to the coil. And you need to catch the fun of that.

You really need good e-juice for your sub ohm atomizer. Gypsy Vapes really have them. We are constantly getting good ratings for our e-juices from many many reviewers anyway. I think it’s just because we are good, please check our e-juices here. They are of the highest quality with the needed ingredients.

Another advantage is that we have really a variety of all possible flavors and brands. You could also make your own, it’s easy and a number of options are indefinite.

Gypsy Vapes is the best e-liquid for squonkers cause of consistency, production of vapor, a lot of good flavors, and quality. Many other e-juices have not that full flavor cause of their low quality and are not using good ingredients as they should be. We use only top-notch and perfectly fitted into everything.

Some alternatives to Squonking

While all this above is very enjoyable for hardcore fanatics in order to get super flavor and vapor you do not need to squonk is a must. Electronic cigarettes and vape mods are the current tech. You now have the option for tech to do all the hard-manual work for you;)

Aspire CF MOD provides big power for low resistance atomizers. This MOD was developed for a low-resistance atomizer. We recommend pairing the Atlantis sub-ohm tank atomizers for a good match with it. The Aspire battery series gives you an impressive design that includes stainless steel endpoints plus a metal button, as well as a carbon fiber coated tube. The Aspire CF MOD has a spring connector as its own feature. That unique technology makes battery and e-cigarette tank having a strong connection.  Itis compatible with 18650 batteries - you can add to your order through us on the link below. It’s a very reliable and stable product in design and functionality.

Vamo V6 20W mod something which has a ton of great features and power. Vamo V6 20W Mod made from steel and has been upgraded lately with an improved chip which gives like 20-watt output, the wattage can be adjusted though from six to twenty watts in half-watt increments. Vamo V6 has a flush 510 connection with a contact pin as we described in the article and it comes with an eGo connector for you to have the ability to use this mod anywhere. The Vamo V6 still provides the extended tube for the usage of one 18650, two 18350, or simply one 18350 battery.  The OLED display screen can show stats like watts, volts, count of puff, atomizer resistance, vaping time, and output current.

That’s how we see squonking really. It’s not for everyone – that’s for sure. We provided you a real view in that solid guide here. Check out the Gypsy Vapes blog more often and you will learn about other vaping styles soon.